"The Asopos river in Greece is providing toxic drinking water to tens of thousands of people, who are getting sick and dying at alarming rates. With over 400,000 times the amount of Chromium 6 that should be in groundwater, the river is running red -- and the death rate from cancer in a town that draws water from the river has jumped from six to 32 percent!

Send a message using the form below to the U.S. Ambassador to Greece demanding pressure be applied to the Greek government to provide a new water source for those living off the Asopos and to enforce laws on the books meant to regulate the over 85 industries operating on the river. Friends of the Earth will copy the government of Greece so they know the United States is paying attention. 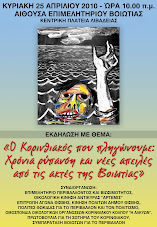